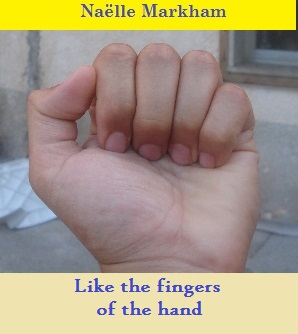 It's a kind of tale for children before sleeping. It tells the story of our fingers, how they were before they became a hand.
Reprendre la lecture

Because my story is about 30 years old, I was not sure if it was really original, so I searched on the web and found some stories looking like mine in english ( I mean the basic idea quite the same) but the same as my original one as I wrote it at first in french I didn’t find it

I wrote my story in French (Comme les doigts de la main) and I translated into English, I would say, I tried to …. (thanks to Reverso) and with also the help of an Italian/English Dictionary (Don’t try to understand why, it’s a long story). I published it first on another website for english writers.

I’m aware there will be mistakes (sure a lot), because even if I can speak english, it’s not my mother tongue and writing is not the same thing as talking. So please would you be so understanding and kind to help me to correct them. Thank you

Once upon a time there were five brothers living together. They had one thing in common: they were all bald. Except for that, they were very different, but they usually got along pretty well, except on one subject.

And there was no way to agree. For years, endless discussions and quarrelling opposed them, and none of them even knew who started it, but the fact is that it never calmed down.

And why were they arguing? About who was going to clean up the room? No, no, not at all. To find out who had to go shopping? Even less. So what was this big problem that made them always getting angry, beeing bored against each other?

Well, since all this time, the big question was who of the five was the boss. And each of them was convinced that he alone had the qualities to be this leader. By the way, why would they need a boss? That was another question, and obviously no one wanted to answer it. Still, one fine morning, the everlasting debate resumed:

« I have to be the leader, I am the index, I know everything, I show everything, I name everything, and you are nothing but perfect incults, so I am the commander, that is how and no other way. » It’s just me, the index, to guarantee your culture and your information. Without me, you wouldn’t even know the sun is a star.

« You, boss? Make me laugh. You wouldn’t recognize your face if you saw it. » Not only is it very ill-mannered for you to show up to people and things, but you’re always stuck in one nose or the other, it’s disgraceful a boss. No, the real chief, it can only be me, I’m the greatest, the middle finger, I dominate you all with my elegance having a length of phalanx more than you and you must respect the one who has the head closer to the sky than all of you.

– Both of you, in any case, are wrong. I, the thumb may be shorter on my paw, but I’m the strongest, and without me you wouldn’t be able to catch anything. It’s me and me alone who announce when everything goes right or wrong and no one else is able of it. I have an indispensable place and no one can take it from me, so as who would say, you have no choice, the leader, it has always been me.

– « The gnome has spoken, but as usual he does not know what he is saying. » I beg you a little respect, what is strength without richness ? And I tell you, I, the ring finger, send all of you back into your nets, you are nothing without me, without this wealth that surrounds me in jewels and wedding rings. Only I am the repository of promises and I testify to the engagements made, the eyes are always on me, and no one pays any attention to your sad lives. The leader is me, and there is no need to talk about it.

« And wealth without power, what is it worth? » Nothing at all, I, the little finger, do not stupidly designate things, I KNOW them, without being told to me, I am may be the smallest one, but I am also much more astute than all of you put together. I sneak around, I have an ear in every house, secrets have no chance with me. And since I have files on everyone, no one can stop me from proclaiming myself chief.

And the fight continued day after day. What you don’t know is that the house of those five brothers was on one arm and that arm was starting to get tired of this restlessness that couldn’t come to an agreement and complicated his life because everyone was doing his own thing.

So one day, the arm had had enough, he grabbed the five brothers and shoved them all together in a black, dark, narrow bag, where there was not enough room for them, even to make a small move.

The middle finger had to fold his last phalanx and he was no longer so tall, the index finger felt useless because he could no more show anything, not even go scratching a nose, that is to say! the thumb, despite all its strength, stuck against the others, could not move and had to sit idly, the ring finger could not find a way to strut showing his jewels since they were locked with him in this prison, and the little finger could do, impossible to guess anything in this black hole, all his antennae were out of service.

It was a rather sad time for the brothers and fortunately for that matter.

Feeling clutched, locked up, blocked, they began to think on their own about a solution to get out of this infernal trap. They could no longer compete for the title of leader. What could have it changed in their situation? They just wanted to get out of there and find the sunlight again.

And one fine day, Eureka, they got it, we don’t know exactly where the idea came from, but what matters is that they got it. They said, « What if we work together, if we join together instead of always fighting? Imagine all that we could do together, strength, knowledge, greatness, wealth and wisdom, we would all be leaders! » « Yes, yes, yes!! ». All the brothers were screaming and laughing, « Absolutely, we will do this. Call this arm of misfortune to get us out of there and promise, we’re going to stick to it, no more disputes, no more fights. »

Straight away, done it. The arm listened attentively to the promises of the brethren and, finally convinced, delivered them.

The brethren kept their promise and gradually made progress in their collaboration; they became one hand together, discovered for example how to make a caress together, hold a pencil to write a story or form a fist to defend themselves, create superb Chinese shadows, and so many other things that I have no room here to tell them.

And it’s so much so that today when we mean that people are very close, very united, we say they are …. like the fingers of the hand. But now that you know their story, you know that it has not been easy, but you have also understood how stronger beings are when they are united than when they are divided.

One version among others

Like I never put it on paper, and even though the frame was always the same,

when I told it, I embroidered according to mood and circumstances, so

Takeover for my grandchildren